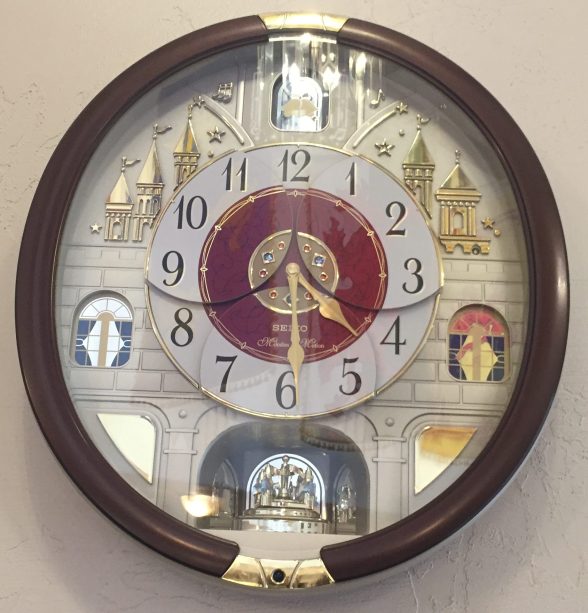 It’s well past time (pun intended =)) for a new adventure. Let’s jump in!

You struggle not to stare at it above the King’s head as he rants about the crime rate in the city. More than once he’s chastised you for not looking at him while he speaks but your eyes keep drifting upwards.

Why did he place the clock over his head if he did not want people to be distracted by it?

“Eyes down,” the King says again with an emphatic rap of his staff against the stone floor.

Your eyes drop from the spinning hands to his wrinkled face. He’s been King for longer than most people have been alive, but the years are etched on his skin in deep crags. Where there’s not enough skin to wrinkle, like on the backs of his hands, he looks like canvas stretched over bone.

“For your crime,” he continues to say once he’s sure you’re paying attention, “you will be sent to the crystal pits for seven days. Should you survive, you will be integrated into the army. Should you not, well,” he shrugs, “you will have paid your time and your family will not be held liable.”

Ice settles, sharp and cold, in your belly.

The crystal pits, all for a loaf of bread.

Your one solace is you have no family for the King’s punishment to fall to. Should you escape before entering the pits, he has no one to go after but yourself.

The King, who turned away with the finishing of your sentence, pauses and turns back just as two guards take your arms to escort you away.

“I almost forgot,” he says, reaching into the pocket of his robe. From it he withdraws a coin like object. He flips it toward you and, when it pings against the ground, you see the circle of numbers on its face. “Your time starts now.” He snaps his fingers.

The small clock at your feet begins to tick with a soft tisking that echoes against the marble floor. A tiny window in the lower portion of the clock face displays a seven.

The guards allow you to stoop and retrieve the coin and then you’re hauled away.

For the ride to the pits a bag is thrown over your head and your arms and legs are bound before they toss you into the back of a barred wagon. You’ve no way of telling time as you bounce around on the wooden floor but, when the wagon stops, you already feel bruised and stiff.

A guard fastens a harness around your waist and then, still blindfolded, you’re lowered down a steep wall. After a time, your feet touch ground. There’s a snick and a soft whistling just before the cut end of the rope smacks you atop your head.

You wait but nothing happens.

With a tentative hand, you pull the rough bag from your head.

Just like that, you’re already in the pits. So much for escaping before you’re delivered. The stories of the pits’ location must be misleading rumors to protect their actual position because, judging by the fact your trial was early morning and it’s not yet noon, the pits can’t be that far from the city.

High above the sun sits in a cloudless sky. Walls of white stone and mica specks surround you. Here and there the walls are pocked with holes, some large, some small, all roughly edged and showing through like windows to more pits of white stone.

You coil up the remains of the rope after untying it from you waist and sling the loops over your torso. Likewise, you work the restraints off your wrists and ankles and save the ropes by tucking them into your pocket.

Your fingers brush the warmed metal of your clock. A peek at it tells you that it is, indeed, just before noon on your first day in the pits.

The first danger you know of is the sun. High in the sky, it’ll bake the pits into a searing heat that’ll cook you like an egg.

You finger the rough bag they used to blindfold you. It’ll irritate your skin but the weave is loose. With a sharp, clean tug, you tear a long strip of cloth from it and tie it around your eyes.

The fabric muffles the world into a dull gray with shadowed spots where the holes pock the walls.

You pick a large hole and climb into it. Instantly the heat of the sun grows softer. The pit on the far side is smaller but also contains more holes that could lead anywhere. In one of them, you can’t spot sunlight on the far end. It’s just a black spot.

You scuttle through into the darker hole beyond.

In that brief moment exposed to the sun, sweat beads along your skin, but in the darker cavern, you’re safe for the moment from the heat. You sit against the chalky, white wall and sigh with relief that it’s cool against your back.

Your relief, however, is brief as a soft shuffling comes from deep in the darkness of the cavern. The crystal pits are known for harboring many dangers. The sun, the lack of water, but most importantly, the creatures that live inside prey on anything that falls down the steep walls.

You listen to the shuffling. Now it’s got a scrape to it, like perhaps the creature has claws that dig into the chalk and crystal of the pits. There aren’t many places to hide and, even as you’re looking for options, a shape materializes in the darkness of the cavern.

You pull the top edge of your sackcloth blindfold down to see better. A young man stares back. He rests a hand against the wall and takes another step forward. Scrrraaapppe goes his peg leg on the cavern floor.

“What you in for?” he asks in a voice that does not belong to so young a man. By voice alone you’d guess him in his eighties as his question warbles at the end.

He scoffs. “Is that what he said? Tell me, did you visit the library recently?”

Your mouth hangs open. Just that week you stepped into the library to escape the press of the afternoon crowd. Once inside, you’d wandered, fascinated by the floor to ceiling shelves full of old tombs.

“Ah,” he sighs. “There’s your true crime. Toss your coin and follow me. The others would love to meet you.”

Toss the coin? According to the King, that’s your ticket out. You have to show it, with a zero in the bottom window to show time served, for the guards to haul you out of the pits.

Your chances of survival without help are slim, so you’re going to follow the young man. However, do you…

A. Pitch the Coin?

B. Hide the Coin?

In the comments below, please tell me which option you’d like to explore. Next Thursday, we’ll see what happens next.

19 thoughts on “Crystal Pit of Time”

There was an error retrieving images from Instagram. An attempt will be remade in a few minutes.

Error: Twitter did not respond. Please wait a few minutes and refresh this page.